Glen Chew, first author of the paper.The researchers observed an expansion of CD8+ T cells expressing, a negative immune checkpoint receptor, TIGIT was associated with clinical markers of HIV disease progression in a diverse group of HIV infected persons. These levels remained high even among those with undetectable virus in the blood. They also found the large fraction of the HIV-specific CD8+ T cells simultaneously express both TIGIT and another negative checkpoint receptor, PD-1 and these cells retained several features of exhausted T cells.

Evaluating Simian Immunodeficiency Virus (SIV) infection of the rhesus macaque non-human primate, has served as an indispensible animal model for studying HIV/AIDS. The authors next defined the TIGIT pathway in this model. “We were successful in cloning rhesus TIGIT and were able to demonstrate, similar to humans, that the TIGIT pathway was active in SIV infection.” said co-author Gabriella Webb, PhD, a Postdoctoral Researcher in the Sacha Lab.

“These results appear to indicate that a large fraction of HIV and SIV specific CD8+ T cells are vulnerable to negative regulation through these two pathways” said Dr. Ndhlovu, an Associate Professor at UH in the Department of Tropical Medicine and Hawaiʻi Center for AIDS. 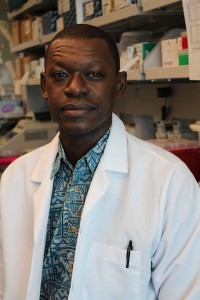 The research team reasoned that by interfering with the TIGIT and PD-1 pathway, they could rejuvenate the HIV-specific CD8+ T cell responses to clear HIV infection. By blocking both the TIGIT and PD-1 pathways with novel targeted monoclonal antibodies, the researchers were able to reverse the defects of these viral specific CD8+ T cells. “Because the results were recapitulated in monkeys infected with SIV, the route into HIV clinical use should be much more rapid, since the pre-clinical studies can be done immediately” said Dr. Sacha, Assistant Investigator at OHSU.

Currently an estimated 2,900 people in the Hawaiian islands are living with HIV/AIDS with many others unaware of their HIV status. The Hawaiʻi Center for AIDS has launched a fundraising campaign, “Hawaiʻi to Zero” (H20) Initiative, to raise additional resources in its mission to discover a cure for HIV. Learn more about the H20 initiative at: http://hawaii2zero.jabsom.hawaii.edu/

The research by Chew and his colleagues was supported in part by the National Institutes of Allergies and Infectious Diseases (NIAID) (RO1 AI087145, K24 AI069994), the UCSF Clinical and Translational Research Institute Clinical Research Center (UL1 RR024131), and the CFAR Network of Integrated Systems (R24 AI067039). Additional support came from the National Center for Research Resources (NCCR) grant P51 OD011092 and the NIAID grant P30 AI027763. Funding was also made possible by collaborative efforts of the Office of AIDS Research, the NIAID, and the International AIDS Society (L.C.N.). Additional support was provided in part with federal funds from the NIAID and NIH contract Number NOI-AI-85341. The contents of this publication are solely the responsibility of the authors and do not necessarily represent the official views of the NIH.